While Lamar County produced any number of early Texas baseball stars, the same wasn’t true for our friends on the south side of Sulphur River. In fact, Delta County has only a few old ballplayers to its claim, so when we run across one seemingly lost to history, we want to take the time to make sure he gets his due. Such is the case with Ben Whittenburg (or “Whittenberg,” depending on the source).

Joseph Benjamin Whittenburg, Jr., was born June 29, 1885, to his Joseph, Sr., and his wife Lucy Amanda Yeager. A Missouri native, the elder Whittenburg arrived in the area in his youth, first settling in Delta County before moving north of Sulphur, to a farm near Dial. It had been a long trek across the southern U.S. for the Whittenburg family, natives of Germany who arrived in the colonies about 1713. After a few years in North Carolina, members of the family moved to Tennessee then Missoui and eventually Texas. It was at his home in Lamar County that Joseph, Sr., met his future wife, a Lamar County native born in the area in 1866.

Joseph, Jr., or “Ben” as he was known, was the second of three Whittenburg sons who joined two sisters. Aside from the farm, their father was a Methodist minister, accepted into the North Texas Conference in early 1891. His membership did not last long, however, as in the fall of 1891, Joseph, Sr., died of typhoid fever. Lucy and her five children moved across Sulphur River, settling in Pecan Gap.  The records do not indicate that Lucy ever held a job; however, the family did appear to live in Pecan Gap proper, and Lucy owned her home outright. Perhaps the Rev. Whittenburg had made sure he took care of his family.

Ben Whittenburg completed three years of high school, recorded as living in Delta County with his mother, two sisters, and brother-in-law on a farm. Presumably, he was finished with high school by 1902 and worked on the farm and did odd jobs in Pecan Gap in his spare time when he wasn’t pursuing what became his true passion, baseball.

Whittenburg’s first professional appearance came in the North Texas League in 1905, first with the Paris Parasites and then with Hope, Arkansas, after the Paris franchise relocated. Ben was primarily a pitcher, although he did play second base as well. No statistics from his first professional season are recorded.

In 1906, Ben moved to the Texas League, a circuit divided North and South at the time. He played briefly for the Temple Boll Weevils in the North Texas League, managed by Lamar County’s Ben Shelton. After just a handful of games, Ben signed with the Galveston Sand Crabs of the South Texas League, landing on the Island for 29 games his first year. On a team that finished 22 games out of first place, Ben posted an 11-3 record as a pitcher and didn’t do badly at the plate, batting .241. The Galveston News noted that Whittenburg was a fan favorite and one of the best young stars in the Texas League with a great future ahead of him in baseball. All that suddenly changed on August 24, 1906, at precisely 5:00 pm.

As it wasn’t Ben’s day to pitch, he was playing second base for the Sand Crabs in what would turn out to be a ten-inning 3-2 loss to the Austin Senators. But while Whittenburg batted against Austin pitcher Bill Bailey, he leaned into a pitch that struck him at the base of his skull just behind his left ear. For a moment Ben stood silently, then without a sound slumped to the ground. He was immediately taken to an Austin hospital where he remained unconscious several hours. In fact, late on the evening of the 24th, doctors were doubtful he would survive. If he had not, it would have indeed been a tragic weekend for baseball, as just a day early in Pennsylvania, Lehigh University student Caspar Musselman was killed by a pitched ball taken to his chest. Fortunately, Ben Whittenburg didn’t suffer the same fate; however, he was deemed out for the remainder of the season.

After recovering home in Pecan Gap, the Sand Crabs pronounced Whittenburg fit to return for 1907. The North and South Texas circuits had reunited into an eight-team league, and Ben returned, this time pitching and playing in the outfield. In spring training, Ben pitched well; in fact, he pitched two exhibition games against the Major League’s Washington Senators, losing both but by scores of only 2-1 and 5-3. When the regular season arrived, however, whatever effectiveness he had as a pitcher the previous year seemed lost. Ben posted just a 6-16 won-loss record. He also played 64 games in the field, but he seemed to have lost his somewhat limited hitting ability and batted just .206 on the year. Before the season was out, Whittenburg left Galveston for a stint with the Terrell Red Stockings of the North Texas League.

The impact of the previous season’s pitch to the head on Ben Whittenburg’s career will likely never be known. But it must be pointed out that during the 1907season, the young man may have been preoccupied with other thoughts, as on September 13 he married Lucy Vernor of Lampasas. He must have announced his retirement from baseball prior to the wedding, as the article notes the couple immediately headed for Pecan Gap where Ben intended to open a business. In 1910, Ben, Lucy, and their first son, Joseph Benjamin, III, are recorded as living in Pecan Gap at the home of Ben’s mother, with both Ben and Lucy performing “odd jobs.” Soon thereafter, the couple moved west to San Angelo where Ben took a job with Walker and Sons Wholesale Grocery. Over the ensuing years, three more children were born but little else changed in their lives. The Whittenburgs remained at the home they purchased prior to 1920 at 313 Spaulding Street, and Ben remained in the same job with the same company into the 1950s

On July 30, 1969, Ben Whittenburg died in Corpus Christi of unknown causes while visiting his son. His body was returned to his longtime home of San Angelo where he was buried in Fairmount Cemetery, joined just a year later by his wife of 62 years. The majority of his siblings, as well as Ben’s parents, are buried in Whittenburg Cemetery near Dial or across Sulphur River in Pecan Gap.

Ben Whittenburg: a potential baseball star hailing from Pecan Gap who was lost to an unlucky pitched ball and nearly lost to history. 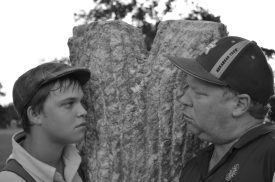 Me and Jerome talking some graveyard baseball

I am a minor league baseball researcher, primarily focusing on early Texas League history. My articles are published by in the Texas League Newsletter (MiLB.com), The Roxton Progress, and right here on this blog. I am also the author of three Texas League history books: "Homeseekers, Parasites, and the Texas Midland: The Texas League in Paris, 1896-1904"; "Baseball on the Prairie: How Seven Small Town Teams Shaped Texas League History"; and "The Galveston Buccaneers: Shearn Moody and the 1934 Texas League Championship." I have just co-authored an autobiography with former minor leaguer Sonny Jackson, "Baseball Diamonds & Country Gold," and I also have written two youth sports novels: "Batting Ninth" (Enslow Publishers) and "Nothin' But Net" (The Future Fisherman Foundation). Current projects include additional Texas baseball research, ghostwriting, freelance editing, and operating the independent Texalina Press. If you like what you see, you'll love the small town Texas newspaper, "The Roxton Progress," owned by my wife Karen and me. Check it out at the link below, and check out my authors page www.krisrutherford.com

Follow Me and Jerome: The Search for Forgotten Minor Leaguers on WordPress.com